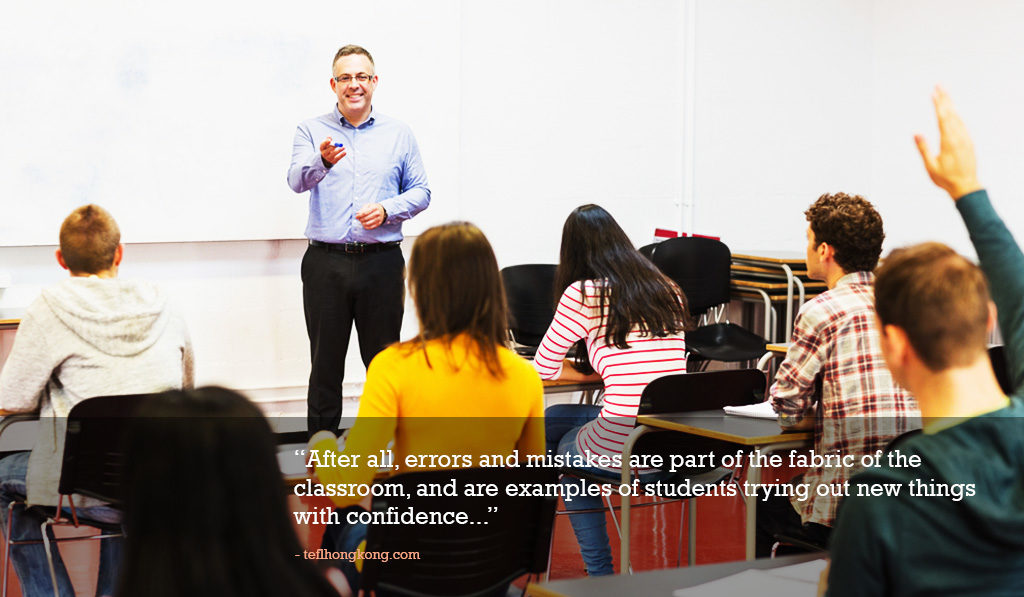 Error Correction: When should we correct student errors?

Error correction is a vital part of the language classroom, but can also be a minefield. No-one likes to be told that they are wrong, so sensitivity and care are required when dealing with errors and mistakes from learners. Here is a rundown of considerations to take into account when addressing inaccuracies in student English.

Prevention is the best cure

The longer an error is left to sit in a learner’s language, the harder it is to get rid of.

A lot of accuracy problems can be stopped before they start with careful, staged presentation of language, allowing periods where students try out new language for the first time in a safe environment.

This can take the form of word or sentence drilling (with targeted correction to guide learners to more correct pronunciation or grammar), or simply asking students to give answers which contain the forms you are teaching.

As long as you call on individuals to have a go at speaking out the new form you are teaching, and take a supportive, positive tone in response, many accuracy issues can be ironed out before they become a more fixed problem.

Correcting learner language during presentation of language, as mentioned above, can make early stages of a lesson last a little longer, but provides a basis for students to work from later in the lesson.

Noting key points on the board during presentation also gives a point of reference for those who still have problems later in the lesson, when a quick gesture towards a highlighted letter or word can be enough to prompt them back to more accurate language.

Again, it is important that every learner has the chance to try out new language one by one, or at least in pairs, as you present it.

If the first time a student has the chance to say the form is thirty minutes into the lesson, others in the class may have already shown that they can form it well, so this risks a knock to the learner’s confidence. In addition, later lesson stages typically require more work from learners, to integrate new language into phrases, sentences and texts, which can add confusion for someone who has not yet confirmed whether they can produce the form correctly.

When moving into practice-based lesson stages, be aware of the difference between an error (an unknowing problem in a form that the learner may not have learnt yet) and a mistake (a slip in language that the learner has studied before, or has been presented with in the lesson).

In later stages, where more complex language is often attempted, it may be unfair to interrupt or highlight true errors – after all, the learner does not necessarily know how or why they have produced something inaccurately.

Mistakes, however, especially in the target language being practised, should be addressed to move towards a more successful lesson outcome all round. Listen carefully to how student responses are structured and pronounced when they speak out their ideas in class, and focus on problems in the area being taught.

In an accuracy-focused restricted practice lesson stage, such as when going through the answers from a gap-fill task where there are specific, expected answers, errors and mistakes can be dealt with as they happen, with teacher responses given answer-by-answer as students feed back their ideas to the class.

In this case, all the learners in the group should be aiming for the same correct response, so it is beneficial to include other members of the class in the process. On hearing an error, open it up to the rest of the class to evaluate (‘what do you think? Did you get the same answer?’).

This encourages learners to listen to each other and brings evaluative thinking into the classroom process. After getting one or two responses from other students, return to the original student and ask them to rephrase their idea.

If this does not lead to a correct form, refer to any notes or sentence examples on the board and see if anyone can rethink the idea correctly.

If these techniques do not work, run through the correction for the student and compare to earlier examples to fix the correct form.

Passing student responses around the class for analysis gets everyone in the group used to being listened to, and integrates higher-order thinking skills into a common lesson stage.

Towards the end of a lesson, where there is likely to be more free production of language (discussions / role plays, etc), the aim is for learners to integrate new language into their fluent speech or writing. For this reason, it may be intrusive to interrupt a learner’s flow for the sake of correction on the spot, so leave speakers to complete their ideas, make a note of any errors you hear, and come back to them in an end-of-lesson review.

If groups of students are producing language fluently in a final stage, walk around the room with a notepad, stealthily taking notes of common mistakes. Then, after the task has finished, anonymously display the incorrect forms on the board. At this point in the lesson, students should have had enough exposure to the forms being taught to correct them easily.

This is a good opportunity for a race to the board where teams can compete to correct sentences, or a quiz-style activity with points for best correction/explanation. Delayed correction is a good way to keep accuracy work student-centered and maintain sensitivity towards your learners.

Teacher correcting errors doesn’t have to be intrusive or exposing for students. If they expect it as part of your classroom routine, then it can become an inclusive process. After all, errors and mistakes are part of the fabric of the classroom, and are examples of students trying out new things with confidence. As long as your response to inaccurate forms is appropriate, correction can be a constructive experience all round.

How to conduct an “English Only” ESL classroom? Is it ever possible to do so?

How to prepare for your first-ever ESL class – Top Tips!